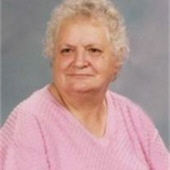 Billie Jean Cearley, age 76 of McCaysville, passed away June 6, 2011 at St. Joseph Hospital in Atlanta. Billie Jean was born July 2, 1934 in Monroe Co., TN to the late William Clyde and Margie Mae Keaton Stuart. A member of Friendship Baptist Church, she was preceded in death by one sister, Carolyn Johnson, one brother, Jim Stuart, a half-sister, Elizabeth Fry, two half-brothers, Rex and Hoyt Stuart and one grandson, Jason Pelfrey.

The family will receive friends from 6-9 pm, Tuesday night at the funeral home. The Finch-Cochran Funeral Home of McCaysville, GA in charge of arrangements. You may send condolences to the family and sign the guest register at www.cochranfuneralhomes.com.
To order memorial trees or send flowers to the family in memory of Billie Jean Cearley (Stuartt), please visit our flower store.