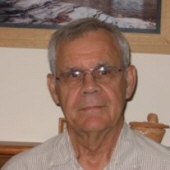 Mr. Baker was born in Hampshire, Illinois, on August 30, 1932, a son of the late Bernerd Baker and the late Mildred Meachum Baker. He was a veteran of the U.S. Air Force, and went on to work for IBM Corporation for 35 years as a field engineer. Carl and his wife moved to Blairsville in June of 1997, from Apopka, Florida. Mr. Baker was a member of New Life Family Church.

Arrangements have been entrusted to the care of Cochran Funeral Home of Blairsville. Please share your condolences with Mr. Baker's family on our website, www.cochranfuneralhomes.com.
To order memorial trees or send flowers to the family in memory of Carl Newton Baker, please visit our flower store.