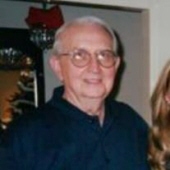 Cochran Funeral Home and Crematory of Blairsville announces Memorial Services for Mr. Carter S. Knight, age 83, of Blairsville, who passed away peacefully on Tuesday January 27, 2015 at the Union County Nursing Home with is wife and daughter at his side.

Carter was born in Marion, Virginia on August 29, 1931 to Josiah M. and Tessie T. Knight. He graduated from Wake Forest University in 1954 with a Bachelor of Arts in English, which served him well in the U.S. Army. After being drafted and completing basic training, he was assigned to the Third Army Headquarters in Atlanta to serve as a General's aid. One of his many duties was critiquing the General's speeches. Another perk in his military career was being pitcher for his fast-pitch softball team where he met his future bride, Jo, and the happy couple became "H.H." (handsome husband) and "B.W." (beautiful wife) to each other for 58 years. His true love was golf. But in between games, he worked as a real estate agent. Most people would say he could have been a stand-up comic with his quick wit and dry sense of humor. He was an intelligent and compassionate man and a loving and devoted husband and father to his wife and 2 daughters, a true southern gentleman.

Carter and Jo resided in Marietta, GA for 42 years and attended Roswell Street Baptist Church until his stroke in 2008. After which he moved to the Union County Nursing Home. His loving wife soon moved to Blairsville to be by his side for the rest of his days.

Memorial Services will be held at 11:00 am on Friday, January 30, 2015 from the Chapel of Cochran Funeral Home with Dr. Bill Camp and Rev. Jerry Helton officiating. In lieu of flowers, Memorial Donations may be made to: St. Jude Children's Research Hospital, donate online at www.stjude.org or by mail to: 501 St Jude Place, Memphis, TN 38105 or Feed The Hungry online at www.feedthehungry.org.

Arrangements entrusted to the care of Cochran Funeral Home and Crematory of Blairsville.
To order memorial trees or send flowers to the family in memory of Carter S. Knight, please visit our flower store.