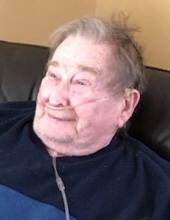 Dale Franklin Miller passed away peacefully in Hiawassee, Georgia on September 16, 2021 at the age of 84. It was the culmination of a long struggle with chronic illness, brought to a close by Covid-19.
He grew up in rural Kalona, and spent much of his adult life in the Iowa City area, before moving to Longwood, Florida. He eventually retired there, and only recently moved to Hayesville, North Carolina to live with his eldest daughter and enjoy the beautiful mountain scenery there.
Everyone who knew Dale would agree he was a “motor head” and a lover of all things fast and powerful, and he bore the title proudly. A tinkerer from a very young age, as a kid he took his dad’s old model A apart and put it back together again, right before he ran it through the back wall of the shed because he installed the rear-end upside-down! He really was a guy who never outgrew playing with cars. He had a lifetime love of racing, and his daughters have fond memories of many weekends spent at the racetrack as they were growing up. After moving to Florida he joined the Daytona
Antique Auto Racing Association. He took great joy in being part of the DAARA family, and served as a former president of the club. Whether he was in the driver’s seat, the pits, or even the stands, he loved being a part of the sport of racing. Even as he became unable to participate much in racing himself anymore, his friends and family still sought his advice and expertise, whether it was car trouble at home or in their own racing endeavors.
He was preceded in death by his sister, Eleanor Bernice Miller, and by his other lifelong love, his wife Carol Lois Miller. He met Carol right out of high school, and he loved her until the day he died. He was survived by daughters Sherry Savrda and Karen Pierce, grandchildren Kristina Mommens, Angela Burrow, Liliana Savrda, Alicia Pierce, Ryker Pierce, Dayton Pierce, and Audrina Pierce, great-grandchildren Garrett Burrow, Abigail Burrow, and Eleanor Burrow, and great-great-grandchildren Kyla Burrow and Zurich Lypher. His family bears his passing with great sorrow, but his memories with joy. Due to current times, a service will be held at a later as
yet undetermined date. Condolences are welcome and can be sent to his daughter Sherry at his address, 482 Matheson Cove Rd. Hayesville, NC 28904, and/or that of his daughter Karen at 949 Evergreen Ct. Iowa City, IA 52245.
Arrangements have been entrusted to the care of Cochran Funeral Home of Hiawassee.
To order memorial trees or send flowers to the family in memory of Dale Franklin Miller, please visit our flower store.