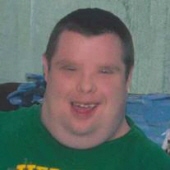 David was born in Conyers, Georgia on July 25, 1985 to the late George Clark Rogers and Joan (Williams) Rogers.

He will be warmly remembered by all who knew him, but especially missed by his family: mother, Joan (Williams) Rogers; sisters & brother-in-laws, Deborah & Dave Jones and Jennifer & Shannon Hone; brother & sister-in-law, Raymond & Sarah Rogers; and the entire Rogers extended family.

Funeral Services will be held at 2:00 p.m. on Thursday, December 10, 2015 from the Chapel of Cochran Funeral Home with Rev. Dave Jones officiating. Interment will be in Union Memory Gardens.The family will receive friends at the funeral home from noon until the service begins on Thursday.

Arrangements are entrusted to the care of Cochran Funeral Home of Blairsville.
To order memorial trees or send flowers to the family in memory of David C. Rogers, please visit our flower store.