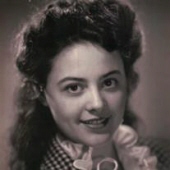 Cochran Funeral Home and Crematory of Blairsville announces the death of Mrs. Dorothy "Dot" A. Hurt, a resident of Stonehenge, Blairsville, Georgia, who passed peacefully on Sunday, October 12, 2014. The family wishes to express their heartfelt appreciation to those who care for Dot during her stay at Stonehenge.

Dot, the daughter of Bill and Esther Ammons and one of ten children, was born on August 28, 1921 in Hohenwald, Tennessee. An excellent athlete, she was a star player for the Lewis County High School basketball team. During World War II, she moved to Detroit, Michigan, to work in the defense industry. Following the war, she returned to Hohenwald where she met and married James L. Hurt, the plant manager of the General Shoe Company. After the Hurt family moved to Atlanta, Dot spent many years modeling for Rich's and others in the fashion industry. Many Atlanta girls of the time benefitted from her modeling and fashion instruction. Dot taught Sunday School for twenty-four years at the Second-Ponce de Leon Baptist Church in Atlanta. She also assisted Jim in his work as a manufacturer's representative.

Dot is survived by daughter Jeter Hurt Sorrells and her husband A.T., grandson Matthew Lovell Wooddy, brother Glen Ammons and his wife Bettye, sister Mary Helen James and her husband Bob, and many nieces and nephews. A memorial service will be held at a later date.

Arrangements entrusted to the care of Cochran Funeral Home & Crematory of Blairsville.
To order memorial trees or send flowers to the family in memory of Dorothy Ammons Hurt, please visit our flower store.