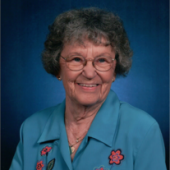 Dorothy Kamp Smith of Blairsville, Georgia, died August 23, 2017. She was born to Arthur F. and Gladys Pruitt Kamp on July 23, 1922, in Chicago, Illinois. She lived there until she was a young teenager when, along with her parents, she moved was made to Kampsville, Illinois. She attended parochial schools and graduated from Sacred Heart Academy, Springfield, Illinois.

In 1941 she married Gene B. Garrison, and they moved to Bismarck, North Dakota in 1951. She was employed by the U.S. Department of Agriculture and retired in 1982.

In 1981 she and William C. Smith married and continued living in North Dakota until his retirement in 1987 when they moved to Bradenton, Florida. In 1993 they took up partial residence in Blairsville and made this their full-time home in 2003.

Dorothy was an active tournament bridge player, having achieved the rank of gold life master. She was also very adept with knitting needles and enjoyed creating beautiful things for those she cared about. An amazing and well loved woman, she maintained memberships in several organizations including: St. Francis Assisi Catholic Church, American Contract Bridge League, American Legion Auxiliary and Veterans of Foreign Wars Auxiliary.

She is survived by two of her four stepchildren, Jake (Shaunna) Smith and Lisa White. She was blessed with 6 grandchildren: Born to Barb Adams – Anneke (Dave) Sayler and Jessica (Joey) Morraca; Born to Jake Smith - Emily (Mike) Weaver and Callen Smith; born to Lisa White – Sean White and Aaron White. Five great grandchildren: twins Lilliann and David Sayler, Ben and Laurel Weaver, and Kinnon Moraca, as well as her beloved niece, Brenda Kopp, also survive Dorothy. She accumulated a multitude of excellent friends who will miss her precious smiling face, her wit, and her intelligence.

She was preceded in death by her parents, her beloved husband, Sir William, her step sons Barry and Curt Smith, and her grandson, Sean White.

Her remains will be interred in Oelwein, Iowa, Woodland Cemetery.

Arrangements entrusted to Cochran Funeral Home & Crematory of Blairsville
To order memorial trees or send flowers to the family in memory of Dorothy Kamp Smith, please visit our flower store.