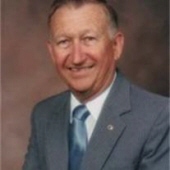 Mr. Gene Douglas Smith, age 79, of Blairsville, Georgia, passed away Sunday, April 24, 2011 at Union General Hospital in Blairsville. Mr. Smith was born on April 23, 1932 in Wayside, Jones County, Georgia, son of the late Fred D. Smith and the late Alma Blackwell Smith. After graduating from Lanier High School in Macon, Georgia, Mr. Smith enlisted in the U.S. Naval Reserve where he served from 1951-1953. He then built a career in the U.S. Civil Service, beginning as an Electronic Equipment Specialist at Warner Robins Air Force Base, and then in the U.S. Strike Command at MacDill Air Force Base, from where he retired in 1989.

Mr. Smith was a wonderful, loving husband, father and grandfather and is survived by his wife of 56 years, Merrill (Merry) H. Smith and their sons, J. Wendell Smith of Blairsville and Gregory E. Smith and his wife Meshelle and their daughter Lindsay of Gainesville, Florida. He is also survived by his sister, Ann Sires of Macon, Georgia; and sister-in-law Cade Smith of Cullman, Alabama; and many nieces and nephews. Mr. Smith was a member of First Baptist Church in Blairsville.

Funeral services will be held Thursday, April 28, 2011, at 11:00 a.m., in the Chapel of Cochran Funeral Home in Blairsville, with Dr. Fred Lodge of First Baptist Church of Blairsville, and Rev. Danny Parris officiating. Special music will be presented by Mr. Marvin Ates and Wendell Smith. The family will meet with friends at the funeral home on Wednesday night, April 27, 2011, from the hours of 6 until 9 p.m. Burial will be on Friday, April 29, 2011 in Macon, Georgia.

Arrangements entrusted to Cochran Funeral Home of Blairsville, Georgia. Please share your memories of Mr. Smith and send condolences to the family at our website, www.cochranfuneralhomes.com.
To order memorial trees or send flowers to the family in memory of Douglas Smith, please visit our flower store.