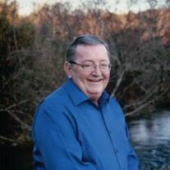 Eddie Panter, age 59 of Blue Ridge, passed away Friday, October 31, 2014 at Fannin Regional Hospital. He was born March 19, 1955 at the Air Force Base in Puerto Rico to the late Walter Edward Panter and the late Shirley German Panter. He was a member of Gospel Light Baptist Church in Blue Ridge, where he served as a deacon and the pianist. Gospel music was an important part of Eddie's life; he played and sang with the Deep South Quartet and Dixie Land Quartet. His last place of employment was Light Saber Promotions in Blairsville. Eddie was preceded in death by his grandfathers, Rev. Ernest German and Walt Panter, and grandmothers, Gladys German and Bertha Panter.

The family will receive friends at the Henry Cochran Funeral Home Saturday evening from 5 PM until 9 PM.

Arrangements entrusted to the Henry-Cochran Funeral Home of Blue Ridge, GA. You may send condolences to the family and sign the guest register at www.cochranfuneralhomes.com.
To order memorial trees or send flowers to the family in memory of Eddie Panter, please visit our flower store.