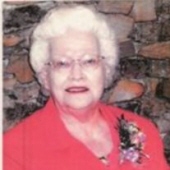 Elsie was a faithful member of Mt. Zion Missionary Baptist Church in Postelle. She served her Lord through this church as Sunday School Teacher, Church Clerk, Sunbeam Leader and was treasurer for 47 years. Elsie was Post Master at Postelle for 27 years. She also served as officer in charge at the Copperhill post office. During the war years she served her country by working for Bell Aircraft in Marietta, GA. Elsie with her husband Windom pumped water to the houses in Postelle in 1948 and continued to provide water for Postelle until 1982 when Copper Basin Utilities took over. In addition to her own children, Elsie helped raise Windom's children Dan and Linda and her sisters, Jean and Frances.

The family will receive friends on Thursday, October 2, 2014 from 6-9 pm at the Finch-Cochran Funeral Home. She will lie-n-state at the church from 11-12 pm before the service.

Arrangements entrusted to the Finch-Cochran Funeral Home of McCaysville, GA. You may send condolences to the family and sign the guest register at www.cochranfuneralhomes.com.
To order memorial trees or send flowers to the family in memory of Elsie Jo Dale, please visit our flower store.