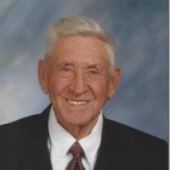 Euclid Ray Voyles passed away Sunday, November 9, 2014 after a long illness.
Mr. Voyles was a life-long resident of the Hiwassee Dam community near Murphy, North Carolina until moving to an assisted living facility in Chattanooga in 2009.
A veteran of World War II, he served in the U. S. Navy as an Ordnance man. His assignments included the U.S.S. South Dakota, the islands of Ponam and Ulithi, and at the war's end he was on the U.S.S. Intrepid. He did Shore Patrol on the Japanese mainland. While on the Intrepid he witnessed the Enola Gay take off on its mission to drop the atomic bomb on Hiroshima.
He revisited the Intrepid in 2008, now docked as a floating museum in New York harbor.
Mr. Voyles returned to Hiwassee Dam on Christmas Eve of 1945, but went to his grandmother's house in order to surprise his mother with his return on Christmas day.
After the war he attended refrigeration school in Birmingham, AL before taking a job with TVA at South Holston Dam, where he met his life's companion, Elaine. They married in 1952. He became a journeyman pipefitter working out of Chattanooga local #43, and retired at 62. During that time he spent over 20 years working on TVA jobs, and was awarded by TVA for that service.
In addition to his pipefitter occupation he also owned and managed a small motel, country grocery store, and was the plumber on many of the vacation homes in what is now known as Bear Paw resort.
He was a Shriner, Freemason, Past Master of Unaka Lodge. In 2009 he received his 60-year pin from Montgomery Masonic Lodge. He also served as a member of the Hiwassee Dam Volunteer Fire Department.
A tree that Voyles planted as a youngster was selected as the Rich's Dept. Store in Atlanta's annual Christmas tree. (This is considered the state Christmas tree of Georgia). He and his family were invited to attend the lighting of the tree, where he met several dignitaries, including Atlanta's then mayor who had been Ambassador to the United Nations, Andrew Young, who asked Mr. Voyles how much he had received for selling the tree to the Rich's Department store.
Mr. Voyles answered, smiling, "You may be the mayor of Atlanta but you will never know how much I was paid for that tree."
Mr. Voyles was the oldest person in North Carolina history to take and complete EMT training at the intermediate level. He took Paramedic training and was a non-paid volunteer on the Cherokee County Ambulance Service for several years.
Mr. Voyles was preceded in death by his wife of 57 years, Elaine Walker Voyles. He is survived by two children, Bruce (Debbie) Voyles and Lori (Greg) McDonald, both of Chattanooga; five grandchildren: Heather (Skip) Bradford of Chattanooga, Vanessa (Jack) Moores of Spring, TX, Ian, Daniel, and Joseph McDonald of Chattanooga and three great-grandchildren Walker Percy Moores, Sara Quinn Moores, and Samuel Forrest Bradford.
Honorary pallbearers are James Headrick, Leroy Headrick, Pat Campbell, Rodney Campbell, Terry John Campbell, Ian McDonald, Daniel McDonald, Joseph McDonald, Jack Moores, and Skip Bradford.
A memorial service celebrating the life of Mr. Voyles will be at Mt. Carmel Baptist Church at Hiwassee Dam, Saturday, November 15, 2014 at 2:00 P.M. The Reverend Richard Morrow will be officiating.
His ashes will be interred in the adjoining Mt. Carmel Baptist Church cemetery with a Masonic graveside service.
In lieu of flowers memorial donations may be made in Mr. Voyles' name to Hospice of Chattanooga, 4411 Oakwood Dr., Chattanooga, TN 37416.
To order memorial trees or send flowers to the family in memory of Euclid Ray Voyles, please visit our flower store.