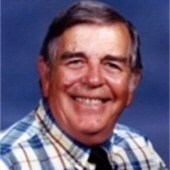 He retired from the US Airforce in 1975, he was very active as a Blue Ridge KiwanisClub member, a shriner, an avid golfer, a ham radio operator and a member of Blue Ridge United Methodist Church, Mr. Holler previously worked as a congressional aid. He enjoyed reading and horticulter, he earned a degree from the Abraham Baldwin Agricultural College of GA.

he was preceded in death by his father, Frayser Carson Holler, Sr.and his mother, Ruth Holler.

Memorial Service will be held at the Georgia National Cemetery of Canton, Georgia on Friday, April 30, 2010 at 11:30am with the National Honor Guard presenting.

Donations may be made in the memory of Mr. Holler to the North Georgia Mountain Crisis Network at P.O. Box 1249, Blue Ridge, Georgia 30513.

The arrangements for this service have been entrusted to the Henry Cochran Cemetery of Blue Ridge, GA. Friends and family can sign the guset register and send their condolences on line at www.cochranfuneralhomes.com
To order memorial trees or send flowers to the family in memory of Frayser Carson Holler, please visit our flower store.