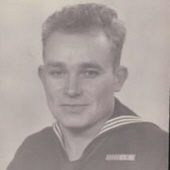 The Cochran Funeral Home & Crematory of Blairsville announces Funeral Services for Mr. Fred Clinton Moore, better known as "Clinton", who passed away on January 11, 2015. Almost 95 years old, he was a direct descendant of John C. Moore, the first white man to settle in what is now Clay County, NC. Clinton was born on March 26, 1920, in Cherokee County, NC, the son of Robert Moore & Gertrude Bryson Moore.

Clinton began doing tunnel construction work when dam building began in Western North Carolina and helped build the diversion tunnels at Fontana Dam. Clinton married Edith Smiley of Bryson City, NC on May 16, 1941 in Blairsville, Georgia and was drafted into the Navy in 1943. He sailed on the maiden voyage of the USS Intrepid until WWII ended. Clinton and his ship survived several suicide plane attacks as well as several torpedo hits. On one occasion he was trapped below deck while fires raged on the aircraft carrier. He received many military ribbons and recently was the recipient of the Quilt of Valor.

After the war, Clinton worked briefly for the REA in Towns County then returned to tunnel work, until being injured in an explosion losing the sight of his right eye. After that, he came to his mother's farm in Towns County and became a chicken farmer and well known beekeeper, teaching the art of beekeeping to many others in the area. Clinton was a Deacon of Old Brasstown Church and only recently retired from his position as Sunday School Teacher there.

Arrangements entrusted to the care of Cochran Funeral Home & Crematory of Blairsville.
To order memorial trees or send flowers to the family in memory of Fred Clinton Moore, please visit our flower store.