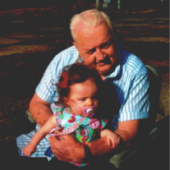 Mr. Gerald Daniel Kaylor, age 76 of Murphy, passed away November 4, 2016 at his home with his family by his side. Mr. Kaylor was born December 26, 1939 in Fannin county, GA to the late Floyd and Myrtle Amburn Kaylor. He was Baptist in faith and preceded in death by his parents and two brothers, Roger Lee and James Floyd Kaylor. In his spare time he enjoyed solving puzzle books and most of all, spending time with his grandchildren.

The family will receive friends at the Henry-Cochran Funeral Home on Sunday, November 6, 2016 from 6-9 pm.

Arrangements entrusted to the Henry-Cochran Funeral Home of Blue Ridge, GA. You may send condolences to the family and sign the guest register at www.cochranfuneralhomes.com.
To order memorial trees or send flowers to the family in memory of Gerald Daniel Kaylor, please visit our flower store.