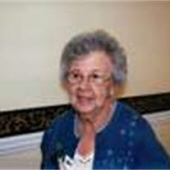 Mrs. Grace Edna Turner, age 91 of Morganton, passed away August 8, 2011 at Gordon Hospital in Calhoun . Mrs. Turner was born February 14, 1920 in Fannin, GA to the late John Burton Ross and the late Ada Wilson Ross. She was a member of Pleasant Hill Baptist Church and enjoyed gardening, quilting and gospel music. She was preceded in death by husband, Early F. Turner, brothers, Earl Ross and Fess Ross, sisters Jean McClure and Ruth Pickelsimer.

Arrangements entrusted to the Henry-Cochran Funeral Home of Blue Ridge, GA. You may send condolences to the family and sign the guest register at www.cochranfuneralhomes.com.
To order memorial trees or send flowers to the family in memory of Grace Edna Turner (Ross), please visit our flower store.