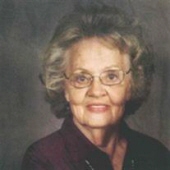 After a life of enjoying hard work and caring for children, Grace Odom left this life to start her new one on January 6, 2015.

Born to Arthur and Alice Craig Parris in the North Georgia mountains on June 11, 1930, Grace was lovely and adventurous. She married James Odom at an early age on September 3, 1946. Her husband departed just short of their 50th anniversary.

Grace had three children, Larry Edward, who passed at birth, Penny "Penn" Rebecca Odom of Mabelvale, and Tammy Jean Lewis and husband Mark E. of Benton. She leaves two grandchildren, Zachary Craig Lewis and wife Christi of Bryant, and Abigail Jillian Hayley and husband Patrick of Little Rock as well as four great-grandchildren. Grace is also survived by two sisters: Evelyn Hunter of Blue Ridge, Georgia and Jean Blount of Stockbridge, Georgia.
Grace left a bookkeeper position at Economy Drug Company in Atlanta, Georgia to be a full time mom. She went on to care for many other children for the next 40 years. She touched the lives of many who called her "Aunt Grace" and was proudest of having won the "Most Caring Teacher" award at the local day care where she worked later in life.

She was a member of New Beginnings Church of Central Arkansas. Her faith and her quick wit sustained her. Grace's beauty, work ethic, and her determination carried her, but it was her love for children, young and old, that has placed her in the hearts of those she touched and undoubtedly in heaven's nursery.

Grace loved flowers and they are welcome; however, donations in lieu of flowers may be made to Alzheimer's Arkansas, 201 Markham Center Drive, Little Rock, AR 72205.

A visitation was held from 4:00 to 5:00 p.m., Friday, January 9, 2014 followed by a funeral service at 5:00 p.m., at Smith – North Little Rock Funeral Home in Arkansas. A private graveside service was held on Sunday at New Union Baptist Church Cemetery in Blairsville, Georgia.

Local Arrangements entrusted to Cochran Funeral Home of Blairsville.
To order memorial trees or send flowers to the family in memory of Grace Odom, please visit our flower store.