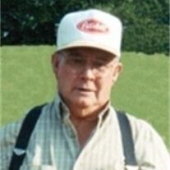 Mr. Youngblood was born Monday, August 3, 1931 in Towns County, GA to the late Arlin and Texie (Garrett) Youngblood. He was a member of Harvest Fellowship, Young Harris, a U.S. Airforce Korean War Veteran and was a crew chief on the F-86 Sabre. Mr. Youngblood was the owner and founder of Youngblood Trucking and Ready Mix.

The family will receive friends at the funeral home from 12-2 P.M., Thursday, January 15.

The Cochran Funeral Home of Hiawassee, Georgia is in charge of arrangements.
To order memorial trees or send flowers to the family in memory of James Arlin Youngblood, please visit our flower store.