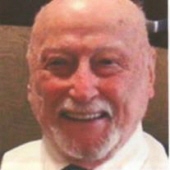 Mr. James Chilton Dalton, age 96, of Blairsville, Georgia, passed away, May 24, 2015, at the home of his nephew and niece, William W. and Hazel E. Earnest, following a very long life. He was born May 22, 1919, in America, Walker County, Alabama, to the late William M. and Mary Cora Garrison Dalton. He was a graduate of Parrish High School, in Parrish, Alabama. He attended the University of Alabama after serving three plus years in the United States Army. He was stationed in Alaska, England and France during World War II. Mr. Dalton lived in several Florida towns during his life including Riverview, Terra Ceia, St Petersburg, Vernon and for thirty years in Defuniak Springs. Mr. Dalton was a member of the East Baptist Church in Defuniak Springs, Florida.

A graveside service will be held at the Zion Church of Christ Cemetery, in Parrish, Alabama, May 30, 2015, at 1:00 pm, with Rev. William W. Earnest officiating. Memorial donations can be made to the East Baptist Church, 901 Bay Avenue, Defuniak Springs, Florida, 32435.

Arrangements have been entrusted to the care of Cochran Funeral Home and Crematory of Blairsville. Please share your condolences with the family on our website, www.cochranfuneralhomes.com.
To order memorial trees or send flowers to the family in memory of James Chilton Dalton, please visit our flower store.