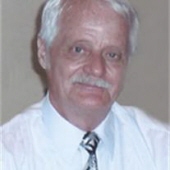 Jim had been a resident of Hiawassee, GA since 2005 and former resident of Villas, NJ as well as Alloway, NJ. He was born September 4, 1942 in Camden, NJ to Charles and Elizabeth Shute. Jim had worked for 11 years at Ranch Hope for Boys in Alloway before moving to Lower Township where he was also a painter.

Jim is survived by his wife Connie, brother John, and sister Ruth and Bob Archer, three sons, Jim and his wife Amy, John, and Tom and his wife Pam, five grandchildren, Andrew, Alexander, Johnathan, Connor and Allison, as well as many other family members and friends.

A Memorial Service will be held on Monday morning, December 6, 2010 in New Jersey.

The Cochran Funeral Home of Hiawassee, GA in charge of arrangements. You may send condolences to the family and sign the guest register at www.cochranfuneralhome.com
To order memorial trees or send flowers to the family in memory of James Daniel Shute, please visit our flower store.