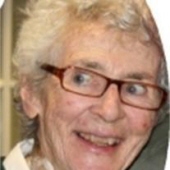 
Jane Gavin, age 83, died at Regency House in Decatur Georgia on January 19, 2010 after a two year battle with cancer.


Born in Wheeling West Virginia, Jane attended St Aloysius Academy, St Mary's College, Wheeling College and ultimately received a degree in Social Work from Catholic University. A teaching job at Emory drew her to Atlanta where she bought a tract of land now called Gavinwood. As she rose through the ranks at Emory, she also became a highly respected and successful independent therapist.


Jane gave generously of her time and talent and was as a leader in Open Hand Atlanta and in helping AIDS patients in the 1980's and 1990's. She was also an advocate for animals and nature and had made her home in the North Georgia Mountains since 1994.


She was preceded in death by her sister Nancy Sellors, and leaves behind another sister, Mary Cecelia Breardon, of West Orange NJ and four beautiful Irish Setter dogs.


In lieu of flowers, Memorial gifts may be made to the Humane Society of Blue Ridge.
To order memorial trees or send flowers to the family in memory of Jane Gavin, please visit our flower store.