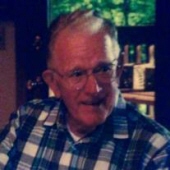 Joe was born May 5, 1929 in Atlanta, Georgia to Alphonse and Gladys Hunter Kuntzler. Joe grew up in the Grant Park neighborhood of Atlanta. He graduated from Tech High School and attended night school at Georgia Tech University. In 1947 he met the love of his life, Mary Adeline Wrinkle. They were married New Year's Day, 1949. Joe went to work as an Atlanta City Fireman for two years before joining his father's steel erecting business. He was to be a steel worker in Atlanta until retirement, and during these years he worked on the first skyscrapers to be built in Atlanta.

Joe was an outdoorsman at heart. His son-in-law, Tom, always said of him that he was born in the wrong century, as he could build anything, grow anything and fix anything. He loved to fish, hunt, garden and work with wood. His dream was always to live adjacent to a national forest, and in 1976 he realized this dream when he and Mary bought a piece of property in the north Georgia mountains. He cleared the land and began building a log home, of which he constructed every inch. The next 30 years he enjoyed his mountain life with all it has to offer. His grandsons, Thomas and Ben, considered Joe and Grandmama's their own private summer camp.

Joe was a member of First Baptist Church of Blairsville where he served as Deacon and was later honored as Deacon Emeritus. His church was to be the source of many close friendships and was a very important part of his life.

Joe will be fondly remembered by all who knew him. He was loved dearly and will be missed especially by his family: his wife of 65 years, Mary Kuntzler, daughter and son-in-law, Susan and Tom Burns, daughter, Vickie Kuntzler, grandson and wife, Thomas and Jamie Burns, grandson, Benjamin Burns, great-grandson, Everett Burns, sister Gladys Mattox, niece, Lettie Ann Johnson and niece, Audrey Kuntzler.

Arrangements have been entrusted to the care of Cochran Funeral Home & Crematory of Blairsville.
To order memorial trees or send flowers to the family in memory of Joe Kuntzler, please visit our flower store.