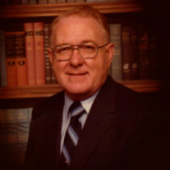 Dr. John Bill Brooks, age 89, passed away peacefully Saturday evening, March 9, 2019, at his home in Woodstock, GA, surrounded by his loving family. Bill was born August 9, 1929, to the late Walter Brooks and the late Cosbie Amburn Brooks in Isabella, TN. He was a member of Woodstock First Baptist Church and taught Sunday School for 25 years. He was a graduate of Murphy High School, earned his B.S. Degree from Western Carolina University, attended Emory University for 2 years, and was sponsored by the Center for Disease Control to receive his Ph.D. degree at Virginia Tech. He was employed by the C.D.C. for forty years as a research scientist, working with research centers in Egypt, Greece, Germany, France, England, Argentina, and St. Judes hospital in Memphis, TN. In 1991, he was awarded the Kimball Science Award for Excellence in Research and had 89 publications in the Journal of Medicine. He belonged to the Masonic Lodge in McCaysville, GA and proudly served his country in Germany during the Korean War. He grew up on Wolf Creek with his best friend, Troy Simonds. They were voted in High School as the most likely to be country music stars. Troy was successful in his love for music. But, as a young teenager, Bill remembered leaning on an oak tree at the edge of Wolf Creek Cemetery, chewing on a sassafrass stick wondering if he would ever amount to anything. Well, his dream in life was accomplished. He wanted to inspire others to take advantage of the opportunities that come their way in life. Dr. Brooks was preceded in death by his brothers, Clarence Brooks, Fred Brooks, and Cargus Brooks, and sisters, Cosbie Jones, Evelyn Boggs, and Frances Simonds.

Arrangements entrusted to the Finch-Cochran Funeral Home of McCaysville, GA. You may send your condolences to the family and sign the guest register at www.cochranfuneralhomes.com.
To order memorial trees or send flowers to the family in memory of John Bill Brooks, please visit our flower store.