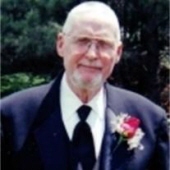 Mr. John Howard Barber, Jr., age 68 of Blue Ridge, GA, passed away Monday, February 16, 2009 at his residence. Mr. Barber, Jr. was born Friday, April 12, 1940 in New Brunswick, NJ, to the late John H. Barber, Sr. and the late Dorothy Frances Gensler Barber. A member of Cherry Log Christian Church. He was a US Navy Veteran, and a Police Officer for 36 years, He began his police career in Middlesex County, New Jersey. He retired as Captain from the Seminole Police Dept. of Hollywood, Fla., a member of the Chief of Police Association, NRA, PBA and FOP. He was a member of Blue Lightning Task Force US Customs, and served as a Commander of the Narcotics Unit for the City of Sunrise Police Dept. of Sunrise, Fla.

Arrangements were entrusted to the Henry-Cochran Funeral Home of Blue Ridge, Georgia.You may send condolences to the family and sign the guest register at www.cochranfuneralhomes.com.
To order memorial trees or send flowers to the family in memory of John Howard Barber,, please visit our flower store.