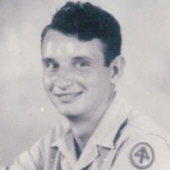 Mr. Hamby was born on August 13, 1923, a son of the late Manley Paxton Hamby and the late Nora Allison Hamby. He served his country proudly and bravely in World War II, attaining the rank of Corporal, and was a recipient of the Bronze Star, Purple Heart, POW and Combat Infantry Badge....He served in the European Theatre, mostly in Italy and France. While in Germany, he was captured and was a POW. Mr. Hamby was a member of Shady Grove United Methodist Church. Besides his parents, Mr. Hamby had been preceded in death by a son, Terry Loy Hamby.

Funeral services for Mr. Hamby have been scheduled for Thursday, April 30, 2015, at 2:00 p.m., to be held in the Chapel of Cochran Funeral Home of Blairsville. The following gentlemen have been selected to serve as pallbearers: Curtis Colwell, Johnny Hamby, Roy Hamby, Steve Lance, Stacy Stephens, and Steve Colwell. Selected to serve as honorary escort are the following gentlemen: Larry Reid, Carlton Colwell, and Dale Hamby. Burial will be in New Harmony Baptist Church Cemetery, with full military honors presented by North Georgia Honor Guard and U.S. Army.

Visitation will be held at the funeral home on Wednesday evening, April 29, 2015, between the hours of 6 until 9 p.m.

Flowers are being accepted; however, if you wish to do so, memorial contributions may be made to Shady Grove UMC Building Fund, P.O. Box 928, Blairsville, GA 30514.

Arrangements have been entrusted to the care of Cochran Funeral Home of Blairsville. Please share your condolences and fond memories with the Hamby family on our website, www.cochranfuneralhomes.com.
To order memorial trees or send flowers to the family in memory of Loy Allison Hamby, please visit our flower store.