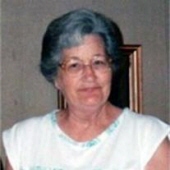 Opal Sara Jane Cordell Hogan, age 89, left her earthly struggles behind on Tuesday, August 30, 2011 at the Murphy Medical Center Nursing Home following a long journey with Alzheimer's disease. Opal was born in McCaysville, GA, to Horace and Amy Cordell but had lived for the past 50 years in Murphy. Opal enjoyed reading, gardening, cooking, tending to her flowers, was an excellent seamstress and was a lady of many talents. In the years since she had developed Alzheimer's, Opal was known by those who provided her care for her wonderful singing voice which she shared daily by singing old hymns.

She was preceded in death by a daughter, Amy Dora Hogan in 1973; a son, Mike Hogan in 1980; her father, Horace Cordell in 1982 and her mother, Amy Cordell in 1984; Herbert Hogan, the father of her children in 1989; one brother, Howard Cordell in 1930 and a sister Johnnie Sparks in 2001. She is survived by one sister, Bonnie Boggs and husband Boge of Ducktown, TN; one son, Pat Hogan and wife Bronwyn of Snellville, GA; former daughter in law, Margaret Lunsford and husband Hoyt of Marble; one daughter, Melody Johnson and husband Chuck of Murphy; eight grandchildren, Jim Hogan and wife Jerrilyn of Millington, TN, Casey Hogan of Snellville, GA, Kelley Hogan of Portland, OR, Michael Johnson and wife Melissa of Fort Bragg, NC, Hannah Berry and husband Bo of Blairsville, GA, Lucas Johnson and wife Rachel of Murphy, Leah and Lydia Johnson of Murphy, two step-great granchildren, Demilee Sines and Danielle Falcon and five great-grandchildren, Samuel, Jaryn, Madelyn and Mary Kate Hogan of Millington, TN, and Adelyn Berry of Blairsville, GA. Also several nieces and nephews survive.

The family will receive friends from 1-3 pm on Sunday before the service at the funeral home. In lieu of flowers the family requests that donations be made to the Alzheimer's Association Western Carolina Chapter - 3800 Shamrock Drive,Charlotte, NC 28215-3220, Phone 704.532.7390 or to the Shriners Club. Arrangements have been entrusted to the Cochran Funeral Home of Murphy, NC. You may send condolences to the family and sign the guest registry at www.cochranfuneralhomes.com
To order memorial trees or send flowers to the family in memory of Opal Hogan (Cordell), please visit our flower store.