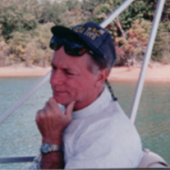 The Cochran Funeral Home of Blairsville announces the death of Mr. Rick E Redd, age 71 of Blairsville, who passed away Sunday, July 15, 2018 at his home. Mr. Redd was born on January 8, 1947 in Atlanta, GA to the late Hoyt & Zona Zachry Redd. He goes on to be with his parents, as well as, his cousin Phil Zachry.

A graduate of Georgia Tech, Richard was a smart, and often extremely comical man. He had the kind of personality that could fill a room and since of humor that could make even the most somber person smile. Richard loved many things, including Georgia Tech, fishing, antique boats and guns. He showed this by his participation in the Georgia Tech Alumni Association, Chatuge Gun Club and the Antique Outboard Motor Club. Above all this , he had a great love for God, his family, his church and helping others. Richard will be remembered by all who knew him, but especially missed by his wife of 49 years, Yvonne Redd; Sisters, Roxanne Patterson, Teena Franks (Keith), Jay Pitts, Mitzi Burrous (Mark), Wanda Pitts and Fonda Stowers (Bill). Also sharing in his legacy are many nieces and nephews.

A memorial service is scheduled for Friday, July 20, 2018 at 2:00pm from the First Baptist Church Blairsville Rock Chapel, with Richards Friend Doug Smith officiating. The family will receive friends from 1:00pm until the service hour at the church. in accordance with Richards love for helping others, the family has requested that donations be made, in lieu of flowers, to Camp Jabez at 121 Split Rock Trail, Morganton, GA 30560.
To order memorial trees or send flowers to the family in memory of Richard E. Redd, please visit our flower store.