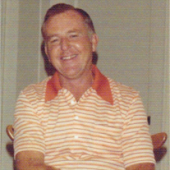 Tommy Frank Williams, age 92, of McCaysville, passed away Tuesday, October 16, 2018. He was born January 20, 1926, to the late Claude Williams and the late Jessie Quintrell Williams. He enjoyed growing up in the Copper Basin Area with his sisters Martha and Mary, along with his many friends. After graduating from Copperhill High School in 1943, Tommy attended Tennessee Wesleyan College in Athens, Tennessee and served in World War II in The United States Navy. Tommy was a member of McCaysville First Baptist Church. He retired from Tri-State EMC after 50 years of service. In his spare time, he enjoyed mowing grass and cleaning cars.

The family will receive friends at the Finch Cochran Funeral Home of McCaysville, Friday, October 19, 2018, 12:00 p.m.

Arrangements entrusted to the Finch-Cochran Funeral Home of McCaysville, GA. You may send condolences to the family and sign the guest register at www.cochranfuneralhomes.com.
To order memorial trees or send flowers to the family in memory of Tommy Frank Williams, please visit our flower store.