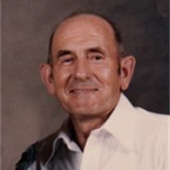 Troy H King, age 93 of Blairsville, passed away Saturday, September 24, 2011 at Chatuge Regional Nursing Home. Mr. King was born September 2, 1918 in Blairsville, GA to the late Jass King and the late Minnie Dillenger King . He was a member of Pleasant Grove Baptist Church where he served as a deacon for many years. Troy had worked with the Civilian Conservation Corps, he was a farmer and also worked for many years at Georgia Boot. He was preceded in death by a daughter, Vivian C. Martin, Brothers, Ovell King, Ed King, Vernon King, Otis King and Jess King and sisters, Bertha Flowers and Artiebelle Ingram.

Arrangements entrusted to the Cochran Funeral Home of Blairsville, GA. Please send condolences to the family by visiting our website at www.cochranfuneralhomes.com.
To order memorial trees or send flowers to the family in memory of Troy H King, please visit our flower store.