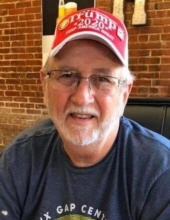 Vernon Rayford Kennedy, age 75, of Dawsonville, passed away Wednesday, August 5, 2020, at Northside Hospital Forsyth. In Farmerville, LA, Mr. Kennedy was born February 3, 1945, to the late Weldon Vernon Kennedy and the late Lora Elise Patrick Kennedy. He was a member of First Baptist Church Of Dawsonville, a volunteer with the Red Cross, a US Army Veteran serving at Fort Campbell, KY, and a member American Legion Post 247. He enjoyed camping, fishing, and boating. He was preceded in death by his father, Weldon Vernon Kennedy, mother, Lora Elise Kennedy, sons, Joel Steven Kennedy, John Patrick Kennedy, and Vernon Lynn Kennedy.

Arrangements entrusted to the Finch-Cochran Funeral Home of McCaysville, GA. You may send condolences to the family and sign the guest register at www.cochranfuneralhomes.com.
To order memorial trees or send flowers to the family in memory of Vernon Rayford Kennedy, please visit our flower store.