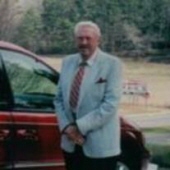 Mr. Virgil Robert Steffens, age 94 of Morganton, passed away Thursday, January 8, 2015 at the Fannin Regional Hospital. Mr. Steffens was born November 20, 1920 in Iowa to the late Carl Steffens and the late Marie Dorland Lusk. He was a Christian in faith. In addition to his parents, he was preceded in death by wife, Mary Haugen Steffens, step-father, Roland Lusk and one brother, James Steffens. Virgil was a WWII Veteran serving in the Army Air Corps. He worked for many years as a land developer and he enjoyed writing in his spare time.

A celebration of life will be held on Thursday, January 15, 2015 at the Henry-Cochran Funeral Home from 5-7 pm.

Arrangements entrusted to the Henry-Cochran Funeral Home of Blue Ridge, GA. You may send condolences to the family and sign the guest register at www.cochranfuneralhomes.com.
To order memorial trees or send flowers to the family in memory of Virgil Robert Steffans, please visit our flower store.