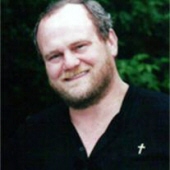 Rick was a former Pastor of Mineral Bluff House of Prayer where he had attended church since 1996. His love for God was a testimony to all who knew him. A former "life of the party guy", Rick celebrated Christ with the same intense joy and love and proclaimed it to all openly. His passion was to visit the jails and minister to "old friends" and "new friends" witnessing of the change Christ had made in his life. Unable to continue due to the debilitating process of ALS, Rick had to discontinue his visits but he prayed daily for his friends.His legacy to them in his own words is, "Because Christ overcame, I have overcome all things through Him. He enabled me to become a new creation by His Holy Spirit. He never once condemned me nor did He ever once leave me. He stuck with me in everything. He is the same to all. Come on boys, He is with you also and I'll see you at the Big House."

In lieu of flowers Rick had requested each individual go to the church of his/her choice and glorify God with him. His family asks we honor his request.

A memorial service will be held at the Mineral Bluff House of Prayer, Saturday, November 5th, at 3:00pm. No food will be served or received. Thank you.

Arrangements were entrusted to the Henry-Cochran Funeral Home of Blue Ridge, GA.You may send condolences to the family and sign the guest register at www.cochranfuneralhomes.com.
To order memorial trees or send flowers to the family in memory of William Rick Long, please visit our flower store.