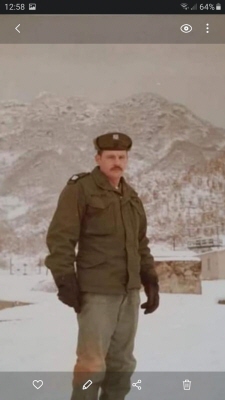 Arnold “Dee” McClure (Sergeant First Class, Retired, US. Army) age 76 of Mineral Bluff, GA passed away Tuesday, August 31, 2021. He was born on April 5th, 1945, in Andrews, NC and was a member of Cornerstone Church, a loving husband to his wife (Kathy Hawkins McClure) of 50 years, a father, grandfather and great grandfather. He was an outspoken Christian that loved going to church and took every opportunity to worship the Lord. Mr. McClure was preceded in death by his father and mother, Arvil McClure and Thelma Hogan McClure and his niece Connie Carringer.
Dee always placed God first in every aspect of his life and displayed his faith through his works and love for others. He never met a stranger and was always willing to volunteer his efforts to help anyone in need.
He led a successful military career, spending a total of 20 years and six months in military service. He enlisted into the US Marine Corps in 1963 and received an honorable discharge in 1969. He went on to re-enlist into the US Army in 1976 and retired from active duty in 1990 as a Senior Non-Commissioned Officer at the rank of Sergeant First Class. After retiring from military service, Dee continued his work ethic. He spent a total of 10 years as an employee at the Murphy, NC Walmart, worked as a brick, rock and block mason and worked at White Path industries through August of 2020.
One of his biggest joys in life was being a grandfather. He enjoyed taking his grandchildren on nature walks and giving them buckets full of ice cream. He also enjoyed showing them where he had “hidden” the ice cream when their parents said that they had had enough. He thoroughly enjoyed helping to take care of Tooter and putting her up to doing things that could possibly get her into trouble.
He loved living life to its fullest. Dee was the type of person that would never sit still. It was almost as though he felt if he sat for too long, he would miss an opportunity to experience life. He loved the freedom that he defended for so many years. His belief was that every person should have the freedom to choose their own path and as he would say “be all that you can be”.
If Dee could speak to us today, he would say “Always put the Lord first in everything that you do, at work, at home or just in passing, always put Him first.” He would also say “you can’t live life in fear, once you start to live like that, you have lost your freedom. Live life to the fullest and press on!”
He is survived by his wife, Kathy McClure; daughter and son-in-law, Amy & Sam Parris; son & daughter-in-law: Matt & Kim McClure; brother & sister-in-law, Ted & Jane McClure; sister, Wanda Carringer; grandchildren, Hayley Parris Uhlik, Kaydee Parris, Bryson McClure, Gage McClue, and Striker McClure; great-grandchildren, Eliza Uhlik; brothers and sisters-in-law, Bob & Donna Hawkins, Ben & Ruth Hawkins, and Leroy & Patsy Hawkins; and several nieces and nephews including special recognition to Pam Hawkins and Jack Hyatt.
Funeral services: Saturday, September 4, 2021, at 2:00 pm at the Henry-Cochran Funeral Home with Rev. Jessie Sisson (message), Rev. Denny Hawkins (eulogy), and Rev. Tully Griggs (graveside) officiating. Interment will follow in New Liberty Church Cemetery. Military Honors by the North Georgia Honor Guard. Pallbearers: Mike Carringer, David Hawkins, Charlie Helton, Donnie Hall, Phillip Barker, and Mike Holloway. Honorary pallbearers: nephews.
The family will receive friends at the Henry-Cochran Funeral Home of Blue Ridge, GA Saturday, September 4, 2021, from 10:00 am - 2:00 pm.
Arrangements entrusted to the Henry-Cochran Funeral Home of Blue Ridge, GA. You may send condolences to the family and sign the guest register at www.cochranfuneralhomes.com.
To order memorial trees or send flowers to the family in memory of Arnold Dee McClure, please visit our flower store.