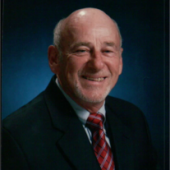 Billy was born in Murphy, North Carolina, the son of the late Virgil Lee Decker, Sr. and the late Bertha Lee Stiles Decker. Billy had a strong work ethic his entire life, starting with delivering the Atlanta Journal and the Grit all over town as a young boy on his red and white Louisville Blue Grass bicycle. He even earned a writeup in the Journal as part of the "Decker Delivery Franchise" for the Murphy area. After graduating from the newspaper delivery business, he rode in a Kern's bread truck delivering bread to many of the same customers as his newspapers. Billy moved to Blairsville in 1969, and joined Union County Bank, now United Community Bank, becoming its 13th employee. A loyal employee of the bank, he played an integral part in its growth over the years working in both Blairsville as well as the Murphy operations. He enjoyed helping people the most, and especially looked forward to Customer Appreciation Day, where he would greet everyone with his warm, welcoming smile, giving out tomato plants and (lots of) hotdogs! Wherever Billy was, there was joking and laughter! He enjoyed golfing with the grandkids and going on camping trips. He loved the beach, and especially the fresh seafood that came with it. A traveler, Billy visited many wonderful places, creating cherished memories with his family. Billy was devoted to God, his family, and his church, First Baptist Church of Blairsville, where he served as a deacon.

Billy would light up a room with his contagious enthusiasm and smile. He will be greatly missed by all who knew him, but especially by his loving family members: wife of 55 years, Eva; daughter and son-in-law, Davia and John Mark Gordon; son and daughter-in-law, Darren and Julie Decker; and Carol Chastain, who is part of the family; two brothers: Virgil Decker, Jr., and Jerry Decker; grandchildren: Chandler Gordon (Emma), Brock Gordon, Haley Gordon, Andrew Decker, Emma Decker, and John Austin Decker.