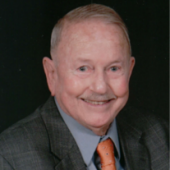 The Cochran Funeral Home of Hiawassee announces Funeral Services for Mr. Carl Broward Williams, age 90 of Hiawassee who passed away at his home on Sunday morning, November 3, 2019.

Mr. Williams was born in Plant City, Florida on January 3, 1929 to the late Eddie Broward Williams and Ruby Florene (Bailey) Williams. As an industrious boy, Carl would ride 25 miles each day on his bicycle delivering newspapers. Shortly after high school, Carl started a 32 year long career in the phosphate mining industry. He held various positions from Research and Development to Quality Control, and eventually became Plant Superintendent. He always held a humble spirit. He retired at the age of 55, beginning a new phase of life working full time on the family cattle ranch.

Carl was very loving and personable. He was quiet and reserved by nature. Gifted with a mechanical mind, Carl could fix just about anything and enjoyed repairing cars and rebuilding tractors. He began a new hobby of woodworking when he moved to the mountains. Carl was an active member of McConnell Memorial Baptist Church where he served as a Deacon and helped with youth activities. He loved gospel music and accumulated a total of 60 years singing bass/baritone in his church choirs. He and his wife, Hilda, had a love of exploration and travel. They have twice traveled the United States, visited various parts of Canada, and toured most of Europe.

Arrangements entrusted to Cochran Funeral Home of Hiawassee.
To order memorial trees or send flowers to the family in memory of Carl Broward Williams, please visit our flower store.