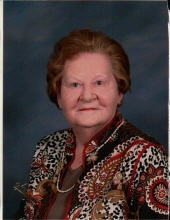 Carol grew up on her family's dairy farm in Magnolia, Ohio and graduated from Magnolia High School as Valedictorian. She began working in Canton, Ohio where she met her future
husband, Harold, and they married in November, 1943. They eventually moved to Marietta, Ga where she got a job at Darby & Maddox Printing Co, and worked.for some years.
The family then moved to Young Harris full time in 1958. Her husband had begun a second career as a Baptist Minister, and she was his faithful helpmate in ministry at several churches
in this area. In the fall of 1958, she began employment in the Business Office of Young Harris College where she worked tirelessly till retirement in 1989. After a trip to Europe, she
began a job with the Towns-Union Educators Credit Union where she worked for several more years. She was very fond of her associates at her various places of employment, but especially
loved interacting with the many students she met over the years at YHC. She enjoyed participating in church music and other programs, but really enjoyed teaching Sunday School classes at First
Baptist Church in Blairsville. Carol was truly a devoted Christian lady. She was a loving, independent woman who was cherished by family and her many friends. She will be sorely missed.

Due to Covid restrictions, only an outdoor graveside service is planned for Saturday, February 20 at 2:pm at Union Memory Gardens where she will be laid to rest beside her beloved husband, Harold.