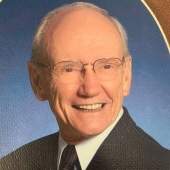 Cochran Funeral Home of Blairsville announces the death and funeral services for Mr. Charles F. Jenkins, of Blairsville, who passed away early Tuesday morning, May 19th, 2020 at home. Mr. Jenkins was 89 years of age.

Mr. Jenkins was born in Young Harris and grew up in Blairsville. Before joining the U.S. Air Force, during the Korean War, Charles graduated from Union County High School and was a student at Berry College and Georgia State University. Charles had a 33- year career with Lockheed Aerospace Company working in various departments and served as Special Assistant to the President. He served as Chairman of Jekyll Island Authority. He served as Georgia State Representative. He was a Mason and a Shriner. He was Director of the Union County Chamber of Commerce. He served on the Blue Ridge Mountain EMC Board. He was a member and Deacon Emeritus of First Baptist Church of Blairsville.

Charles is preceded in death by his parents, Charlie and Eva Jenkins; brother; Ed Jenkins; and sister, Ella Battle. Charles is survived by his loving wife of 68 years, Bonnie Johnson Jenkins; his son, Rick (Cindy) Jenkins; and three grandchildren, Patrick (Lara), Derrick, and Callie. He is also survived by his sisters, Marilyn Thomasson and Patti (Bobby)Chambers; and brother, Kenneth Jenkins.

Funeral Services will be held at 11:00 am on Friday, May 22, 2020 at First Baptist Church of Blairsville with Dr. Fred Lodge officiating. Eulogies will be given by Dr. Nelson Price and Rev. Rick Jenkins. Music will be presented by R. Terry Hooper accompanied by Kathy Rogers. Interment will follow at Union Memory Gardens Cemetery with Military Honors presented by the North Georgia Honor Guard. The following gentlemen have been selected to serve as pallbearers: Karry Kirchner, Kenny Jenkins, Tim Garred, Patrick Jenkins, Derrick Jenkins, and Hollis Townsend.

Due to local, state, and federal regulations concerning COVID 19, all guests are required to practice physical distancing of 6 feet apart while in the building, unless you are members of the same family. Please wear face coverings if you have those.

Arrangements entrusted to the care of Cochran Funeral Home & Crematory of Blairsville.
To order memorial trees or send flowers to the family in memory of Charles F. Jenkins, please visit our flower store.