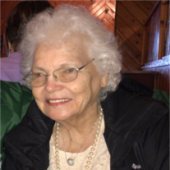 Mrs. Christine Lois Kyle, age 89, of Athens, TN, formerly of McCaysville, GA, went home to be with the Lord on Tuesday morning, February 4, 2020, surrounded by family. She was born in Ducktown, TN to the late George William "Bill" & Ethel Payne Anderson, on Thursday, March 27, 1930. She was married to Alvin James Kyle for 49 years.

She was a dental assistant for Dr. Mullins, DDS for approximately 20 years before her retirement. She enjoyed singing in church choirs including Prime Time singers. Also, a member of the Mobile Baptist Church and The Garden Club. She enjoyed reading, painting, and traveling.

Christine goes on to be with her parents, Bill & Ethel Anderson; husband, Alvin James Kyle; sister-in-law Carol Anderson and many other relatives.

Funeral services will be held at 3:00 pm from the Mobile Baptist Church in McCaysville, GA, on Thursday, February 13, 2020, with Rev. Gary Parris officiating and Special music will be provided by Ed Vest and Jan Pelfrey. Interment will follow in the church cemetery. The family will receive friends from 2:00 pm until the funeral hour at the church. Joseph Withrow, Ronnie Withrow, Jason Withrow, Kent Arp, Jason Arp, and Brandon Arp have been selected to serve as pallbearers.

Finch-Cochran Funeral Home & Crematory of McCaysville is honored to be serving the family.
To order memorial trees or send flowers to the family in memory of Christine Lois Kyle, please visit our flower store.