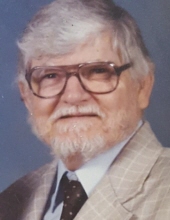 Mr.Clair Gordon Saxton Sr, age 97 of Cherrylog, passed away Friday, July 24, 2020, at his home. Mr. Saxton was born September 18, 1922, in Wellsville, NY. He was adopted by the late Clair O. Saxton and the late Wilma Waldack Saxton. He attended and supported the First United Methodist Church of Copperhill, TN and was preceded in death by his wife, Merle Elizabeth "Jackie" Saxton and his son, Clair Gordon Saxton, Jr. Mr. Saxton was a true patriot who served in the Army Air Corp during WWII and retired from the U.S. Air Force as a Master Sergeant. He was a member of the Disabled American Veterans, Chapter 28. He enjoyed woodworking and was an accomplished carpenter who, with the help of his wife and numerous close friends and relatives, constructed his own home using lumber from the surrounding property. He will be fondly remembered and missed by his family.

Arrangements entrusted to the Henry-Cochran Funeral Home of Blue Ridge, GA. You may send condolences to the family and sign the guest register at www.cochranfuneralhomes.com.
To order memorial trees or send flowers to the family in memory of Clair Gordon Saxton, please visit our flower store.