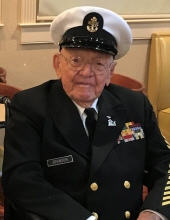 Mr. Johnson was born on March 7th, 1922 in Canton, Ohio, and he and his family moved to north Florida when he was very young. Mr. Johnson was the son of Eugene Johnson and Gladys May (Bennett) Johnson. He had been preceded in death by his parents; two brothers, two sisters; Virginia (Shultz) Johnson, mother of his children. Three of his children are deceased: Scott Johnson, Lynn Johnson, and Sue Ann Colligan.

"Bud" came to Hiawassee in the late 1970's from Ft. Lauderdale, Florida. A veteran of World War II and enlisted in the U.S. Navy June 14, 1939 as Apprentice Seaman, was a Chief Petty Officer for over thirty years and retired from the U.S. Navy in 1975 with over 36 years of service in the U.S. Navy and Naval Reserves. He served during World War II in the Atlantic-European Theatres of war, and was an Iwo Jima veteran of the Pacific. He received 14 U.S. Navy medals and two Foreign medals during his naval career, and served aboard seventeen different naval vessels, including fleet boat submarines. "Bud" was a graduate of the Atlantic Merchant Marine Academy, New York City, New York, under the G.I. Bill. He had been employed by Grace Line Steamship Company - Pier 57, in New York City as a Ship's Deck Officer, and obtaining a U.S. Coast Guard Ocean Master's license. The advantage to take a position as a yacht captain, both in sailing and power vessels, was accomplished before his retirement from his sea-going career and moving to Hiawassee. "Bud" had been active in the following military associations: National Chief Petty Officer Assn., USN; International Chief Petty Officer's Assn., (President/Director); USS Missouri (BB-63) Assn.; American Battleship Assn., San Diego, CA; Pearl Harbor (USS Arizona BB-39) Memorial Assn; USS Hughes (DD-410) Assn.; Tin Can Sailors Assn., U.S. Navy; USS Silverstein (DR-534) Assn.; U.S. Marine Corp League (Associate) (Unicoi Det. #783) Hiawassee; VFW Post #7807, Hiawassee, GA; American Legion Post #23, Hiawassee, GA; and USS Missouri (BB-63) Memorial Assn., Pearl Harbor, HA.

Bud was an avid camper and outdoors person and worked in retirement in campgrounds as the manager, host, security and consultant of campgrounds in Florida, North Carolina, and Georgia. "Bud" was of the Baptist faith, and was a teacher of God's Word, the Bible. He was a member of Woods Grove Baptist Church.

Arrangements have been entrusted to the care of Cochran Funeral Home of Hiawassee. Please share your condolences and memories online at www.cochranfuneralhomes.com.
To order memorial trees or send flowers to the family in memory of Clarence Eugene (Bud) Johnson, please visit our flower store.