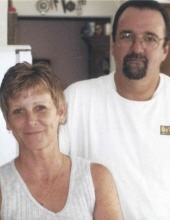 Blairsville - Deborah K. Fitzwater (Rahr), died after a short battle with Ovarian Cancer April 6,
2022, at home. She was born June 17, 1957, in Hornell, New York, the daughter of Kenneth and Patricia
Rahr (Wilbur). Debbie graduated from Canisteo High School, Class of 1976. She married her husband of
43 years in 1979, after finishing his tour in the U.S. Navy they settled in Hornell, NY. Debbie worked 20+
years at Do It Best in Hornell, where she managed the Strawberry Basket gift shop.
In addition to her grandparents, she was predeceased by her sister Connie France. Surviving in
addition to her husband, William Fitzwater, are her children Fawne Reigel and her husband Charlie of
Perry, GA; William Recktenwald of Canisteo, NY; Heather Fitzwater of Canisteo NY and bonus daughter
Amber McCutcheon and her husband Jessie; nine grandchildren Bret, Tara, Brooke, Barbara; Samual
(Sadie); Nik, Gavin; Maddie, Macie; one great grandson Gabriel; her parents Ken and Pat Rahr; two
brothers Mike and Dan Rahr; and many nieces and nephews and her dogs Teddy and Cocoa.
Debbie was a dedicated wife and mother always putting her family before herself. She was also
a doting grandmother, she loved nothing more than spoiling her grandkids. Debbie loved crafting, even
starting a small business after retiring from Do It Best.
A Celebration of Life will be held at the Canisteo American Legion on June 11 th, 2022. Details will
be released later. Those who wish to remember Debbie may make gifts in her memory to the Georgia
Mountain Hospice Inc. P.O. Box 580, 70 Caring Way, Jasper, GA

To order memorial trees or send flowers to the family in memory of Deborah Kay Fitzwater, please visit our flower store.