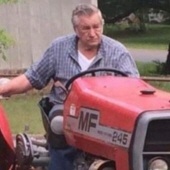 Don Gilliam, age 85, of Woodstock, GA, passed away on Saturday, July 11, 2020. On October 21, 1934, Mr. Gilliam was born in Mineral Bluff, GA, to the late Charles Gilliam and the late Edith Mae Cloer Gilliam. He graduated from East Fannin High School in 1956 and was a retired railroad engineer with CSX and enjoyed working in his vegetable garden in his spare time. Don was preceded in death by his father, Charles Gilliam, mother, Edith Mae Cloer Gilliam, wife, Carolyn Joyce Nickless Gilliam, and brother, T.J. Gilliam.

The arrangements of Mr. Don Gilliam entrusted to the Henry-Cochran Funeral Home of Blue Ridge, GA. You may send condolences to the family and sign the guest register at www.cochranfuneralhomes.com.
To order memorial trees or send flowers to the family in memory of Don L. Gilliam, please visit our flower store.