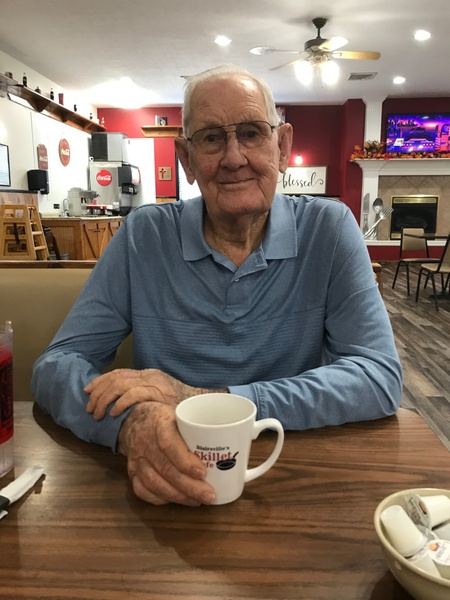 Don was born on December 21, 1932, in Morganton, GA, to the late Arthur Panter and Eula Estella Colbert Panter. He was a veteran of the Korean Conflict serving in Germany. He was one of the oldest living members of Hemptown Baptist Church. He had retired from City Service Company in Copperhill, where he had worked as an electrician. He enjoyed watching his Atlanta Braves, fishing, and tending to his garden and his yard.

Donald is preceded in death by his wife, Eva Nell Kendall Panter, and daughter, Sherry Ferguson.

Funeral services will be held Sunday, May 22, 2022, at 3:00 PM from the Henry-Cochran Funeral Chapel. The Rev. Gerald Mathis and Rev. David Whitener officiating. The music will be by Brian Huffman and Alisa Stanley. The family will receive friends at the Henry-Cochran Funeral Home Sunday from 1:00 PM till the funeral hour of 3:00 PM.
Burial will follow in the Hemptown Baptist Church Cemetery with Military Honors by the North Georgia Honor Guard.
In lieu of flowers, the family request that donations may be made to your favorite charity or a charity that helps children.
The following gentlemen will serve as pallbearers, Joseph Sisson, Donald Powell, William Powell, Jeremy Ferguson, Adam Ferguson, Cole Kendall, and Nathan Davenport. In addition, Elizabeth Powell, and Ryan Larson will serve as honorary pallbearers.
Cochran Funeral Home is honored to serve the family of Don Panter; you may send condolences to the family and sign the guest register at www.cochranfuneralhomes.com

To order memorial trees or send flowers to the family in memory of Donald Panter, please visit our flower store.