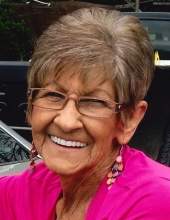 Doris Ann Anderson, age 76 of Marble, NC passed away September 10, 2020, at her home. Mrs. Anderson was born March 4, 1944, in Bryson City, NC to the late Lee Bailey and the late Ruby Davis Bailey. A member of Junaluska Baptist Church, she was preceded in death by her husband, Ted Joseph Anderson, grandchildren, Tyler Walker and Sadie Ellise Barton, and her sister, Della Mae Sherrill. She enjoyed cooking and spending time with her family.

A private memorial service is scheduled.

Arrangements entrusted to the Cochran Funeral Home of Murphy, NC. You may send condolences to the family and sign the guest register at www.cochranfuneralhomes.com.
To order memorial trees or send flowers to the family in memory of Doris Ann Anderson, please visit our flower store.