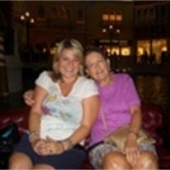 Doris King Williams, age 83, of McCaysville, GA passed away Saturday October 16, 2010 at Kennestone Hospital following a lengthy illness. She was born in Copperhill, TN on April 9, 1927 to Otis and Drucilla Fry King. She enjoyed growing up in the
Copper Basin Area with her sister Betty Ann, brother Thomas, and many friends. Doris graduated from McCaysville High School in 1944 and began working at the Smelter Store. On July 9, 1949, she was united in holy matrimony to Tommy F. Williams. Doris became a homemaker, and the two of them enjoyed a rich, joyful marriage of 61 years.

Doris was a member of the First Baptist Church of McCaysville where she assisted with teaching Bible School and Sunday School in her early years, and in more recent years, enjoyed sharing her knitting skills with the Stitches of Love knitting group. Doris assisted the group in their mission to provide soldiers and cancer patients with knitted hats.

Doris known to many as “Auntie”, enjoyed crocheting and craft work, in addition to knitting. She adored her nieces and nephews and cared for them as her own children. Doris was very generous with her talents and enjoyed sharing her handwork with family, friends, and anyone in need.