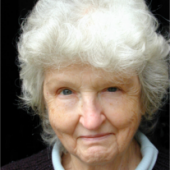 Doris McGowan passed away on February 12, 2020, at her home in Blue Ridge, GA, surrounded by her family. Born April 25th, 1927 in Bronx, NY to Emil and Mary (Miller) Braun. She graduated from Otisville High School and married Joseph A. McGowan April 4th, 1948. They moved to Florida in an old jalopy that, probably, would not be deemed roadworthy by today's standards. They had four children: Patricia (Halpin); Donna, Michael, and Merrily. Doris (mom to us) was strong-willed, opinionated and independent. She took classes at the University of Florida and eventually worked as our dad's legal secretary. She was active in the Republican Party while living in Miami, Fl and retired in Blue Ridge, GA in 1981. While in Blue Ridge, she was active in St. Anthony's Catholic Church and took classes in clogging, basket weaving, chair caning, beading, playing the dulcimer, just to name a few. When our dad developed early Alzheimer's, she became his primary caregiver and, at the same time, she took on her two invalid aunts. She cared for all three for several years until they passed. She was preceded in death by her siblings: Eleanor (Wilbur), Richard and Rita (Hosking) and so many of her friends. She will be missed by many.

Visitors will be received from 5-7 PM at Cochran's Funeral Home with a rosary held by Fr. John Conway. A Funeral Mass will be held at 11 AM February 18th, at St. Anthony's Catholic Church, followed by a graveside service at Chastain Memorial Park Cemetery.
To order memorial trees or send flowers to the family in memory of Doris McGowan, please visit our flower store.