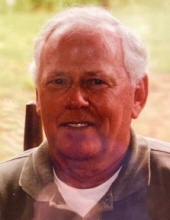 If a man’s treasures are measured by family, friends, and relationships, then Edward Harold Denton was truly as blessed as any one man can be.

Edward passed away on November 12th, 2021 in Aledo, Texas, surrounded by his loving family. Born on April 23rd, 1933 in Hiawassee, Georgia to Harold and Susie Denton, he was raised and educated in Towns County. Edward joined the U.S. Army during the Korean Conflict and was stationed in El Paso, Texas. He served as cadre of the leadership and training course at Fort Bliss. Edward served his entire tour in El Paso as an anti-aircraft and artillery instructor and left the service in 1955.

Edward married his wife, Janet Nichols in 1956 in Rabun County, Georgia. They raised one loving son, Edward Mitchell Denton. He worked in the freight and shipping industry for the duration of his career. In addition, he obtained his barbers licenses and practiced part time. In retirement, he was a gentleman farmer and loved to play the game of golf.

Edward is survived by his brother, Jimmy Denton of Hiawassee, Georgia; his son & daughter-in-law, Edward & Joan Denton of Aledo, Texas, as well as his four grandchildren: Matthew, Sarah, William, and Jacob all residing in Texas. Additionally, he is survived by his four great-grandchildren Leighton, Presley, Clara-Kate, and Eloise. He was preceded in death by his wife, Janet Nichols Denton; his parents, Harold & Susie Denton; and brothers, Phil Denton, Duard Denton, and Bobby Denton.

Funeral Services will be held at 3 p.m. on Sunday, November 21, 2021 from the Chapel of Cochran Funeral Home of Hiawassee with Pastor Wade Lott officiating. The family will receive friends from 1 p.m. until the service begins. Special Music will be presented by Wes Lipscomb. A Eulogy and Scriptures will be shared by Sarah Lipscomb and Joan Denton. Interment will be in Laurel Hills Memory Gardens Cemetery with Military Honors presented by the North Georgia Honor Guard. Gentlemen serving as pallbearers are: Matthew Denton, William Denton, Jacob Denton, Jacob Nichols, Wes Lipscomb, and Mickey Denton.

In lieu of flowers, please make contributions in memory of Edward Denton to the Dementia Society of America by mail to PO Box 600, Doylestown, PA 18901, or online www.DementiaSociety.org/donate.

Arrangements entrusted to the care of Cochran Funeral Home of Hiawassee.
To order memorial trees or send flowers to the family in memory of Edward Harold Denton, please visit our flower store.