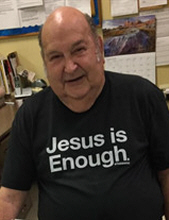 Elvin Earl Wright, age 80, of Copperhill, passed away Saturday, August 1, 2020. Mr. Wright was born August 15, 1939, to the late Elvin L. Wright and Nola Garren Wright. He was a member of McCaysville Church of God. He was preceded in death by his wife, Patricia Ann Ballew Wright, son, James Earl Wright, and son, Evin Edward Wright.

Earl Wright was a dedicated husband, father, and friend. He loved his wife, Pat. Earl took care of her, especially when she struggled with poor health in her later years. He suffered greatly from the loss of his oldest son Beau in a tragic car accident years ago. He also totally devoted himself to the care and joy of his youngest son, Ed. While Ed struggled with serious health problems for several years, Earl never left his side and made sure he had the best care possible until the Lord called him home four years ago.

Earl was multi-talented and performed careers in dental technology, swimming pool construction, photography, and retired from Lockheed Martin Aeronautics company with over 20 years of service as a plastic and composite parts fabricator. He built components for some of the military's most prestigious aircraft, such as the C130J Hercules, V22 Osprey, and F22 Raptor. Earl enjoyed many years of service as a leader with the Boy Scouts of America. He enjoyed hiking in the mountains and hunting with Mitch and John, Jamie, Marion, Jeff, his brother Bill and many others. Some of his all-time favorite trips were mule deer and antelope hunting out west and deer and hog hunting off the Georgia coast islands such as Ossabaw and Sapelo. Earl was an outdoor enthusiast and enjoyed the marvelous world God created.

Earl was the best friend a man could have. He did not sugar coat anything! He was brutally honest, and you never had to guess where he stood on any subject. He was jovial and adventuresome. There was never a dull moment in his presence, yet he could be dead serious when the situation called for it and uncompromising, especially in his faith in God. He proclaimed that Jesus Christ is Lord and King by his words and by his actions. His love for Jesus was sure and sound, and he lived out his faith to the end. He recognized and proclaimed that he was a sinner mightily saved by grace through faith in Christ Jesus. He was a member of McCaysville Church of God and loved pastor Steve Lamb. A Scripture that applies to this faithful brother is found in II Timothy 2:7-8, "I have fought the good fight, I have finished the race, I have kept the faith. Henceforth, there is laid up for me the crown of righteousness, which the Lord, the righteous judge, will award to me on that Day, and not only to me but to all who have loved His appearing." (ESV)

Arrangements entrusted to the Finch-Cochran Funeral Home of McCaysville, GA. You may send condolences to the family and sign the guest register at www.
To order memorial trees or send flowers to the family in memory of Elvin Earl Wright, please visit our flower store.