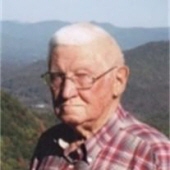 
There are numerous ways to remember Eugene Dyer. Certainly most people will remember him as the white-haired farmer, sitting happily on his tractor, working endlessly every day on his acreage across the Nottely River from his grocery store. This image of the hard-working farmer who loved his land and his crops will remain vivid in the thoughts of his many friends and family!
The many customers in his general store will also remember him as an honorable friend who was willing to lend an ear over the pot-bellied stove on a winter?s day and send them on their way with whatever they needed, be it groceries, gas, feed or fertilizer. For those who couldn?t pay at the time, he would often barter or ?put them down on his books.? He was a generous man who truly cared about his neighbors and friends, all the while working hard and succeeding in being a really efficient and admired businessman.
Eugene bought the store in 1947 and ran his business until 1984. He farmed until two weeks before his death, going up on his mountain with Tim, his son, to cut wood just one more time!
While they were in school, all of his children remember him being dedicated to going to the Union County Board of Education meetings every month. He believed in education and wanted to make a contribution of his time and energies not only for his own children but for the good of all the children attending school in Union County . He served as a member of the Board of Education for 36 years, the longest service in this office in Union County history and, for that matter, in the state of Georgia .
Eugene enlisted in the Air Force during World War II where he served as a Sergeant in the 515th bomber squadron. He was an aerial nose gunner on a B-24 plane called Sweet Meat. He flew many missions, the most famous one being to defend an oilfield in San Pan Pazio, Italy. One engine had been shot out completely upon their return and, when counted, there were 300 holes in the fuselage of the plane--- but the crew was unharmed and the oilfield had been retained by the Allies! However, his luck as a gunner eventually gave way to a dark side when the plane?s oxygen system was shot out and the plane crashed, killing all on board except for Eugene and another member of the crew that he pulled out of the burning wreckage of the plane. For this heroic action, he deservedly was awarded a coveted Air Medal with an oak leaf cluster, earned for heroism, something he has been proud of his entire life. Sgt. Eugene Dyer also was awarded a Soldier?s metal as well as the Purple Heart for injuries he endured from the plane crash, wounds mainly sustained by his legs and involving a lengthy hospital stay. He also has the Good Conduct Medal, the European-African-Middle Eastern theater ribbon with five campaign stars, and the Distinguished Unit Badge with two oak leaf clusters.
Francis Eugene Dyer was born to Jewell Marion Dyer and Azie Collins Dyer on February 25, 1921 and lived on Route 2 in the Choestoe section of Union County during his youth. He married Dorothy, a fellow Union Countian who he met when she visited his new general store as a customer. Their marriage has lasted for more than 60 years and they happily worked together all this time on tending their farm, maintaining a thriving store, and raising three children.
Eugene is survived by many who have loved him for so many years: Dorothy Dyer, his wife, and his children and their families--- Connie Dyer of Alpharetta/Johns Creek, Georgia; Ivan and Margaret Dyer of Andalusia, Alabama and their children Jason and Alexandra; Tim and Nancy Dyer of Blairsville, Georgia and their daughter, Emily.
Eugene also had the fortune of many loving brothers and sisters. His brother, Bluford, preceded him in death, but his surviving brothers and sisters include: Louise Dyer of Commerce, GA.; Ethelene Jones of Milledgeville, GA., Brenda Murphy, Linda Fortenberry, Gail Hedden, Troy Dyer, Janice Lance, and stepbrother, Lloyd Shelton, all of whom still live locally here in Union County.
Eugene Dyer lived to the advanced age of 88 and is, indeed, a man to be admired. He loved his parents; he served a country that he also loved with heroic ability; he loved his wife and children and was a model citizen, husband and father; he loved and doted on his grandchildren; he loved his work of farming, tending the land that nourished and upheld him for so many years; he loved his neighbors and customers who traded with him at Dyer?s Grocery, treating everyone with respect and concern; but, most importantly, he loved life itself, a precious commodity to him, a thing to be cherished and lived to its fullest. And, bless him, he did live life to its fullest! He will be remembered?.
Eugene became a Christian as a young boy and was an active, faithful member of Choestoe Baptist Church. His body was entrusted to Cochran?s Funeral Home in Blairsville, Georgia.
Funeral services will be held at Choestoe Baptist Church, where the body will lie instate 30 minutes prior to the service, on Wednesday, December 23, 2009 at 11:00 A.M. with Reverend Ken Zollinger officiating. Pallbearers will be: Jason Dyer, Buddy Hunter, Bill Collins, Keith Jones, Bob Queen, Carlos Berrenquer, and Sylvan Dyer. Music will be furnished by Eddie Owens, Linda Thornton, Jo Mosley and Martha Collins. Interment will be in Choestoe Baptist Church Cemetery with military honors conducted by The North Georgia Honor Guard.
The family will recive friends at the Cochran Funeral Home Tuesday, December 22, 2009 from 6:00 PM until 9:00 PM.
In lieu of flowers, the family suggests that memorials be made to the American Cancer Society or Regency Hospice.
To order memorial trees or send flowers to the family in memory of Francis Eugene Dyer, please visit our flower store.