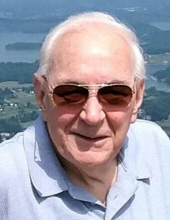 Mr. Veney was born and raised in Newton Falls, Ohio. He worked as an electrical leader for Copperworld Steel and was also a licensed HAM radio operator and trainer. Frank was a 32nd degree Mason of the Garretsville, OH Masonic Lodge, he had been a resident of the North Georgia Mountains for 22 years. He is preceded in death by his wife, Kathryn Veney.

Arrangements are entrusted to the Cochran Funeral Home & Crematory of Blairsville.
To order memorial trees or send flowers to the family in memory of Frank Eugene Veney, please visit our flower store.