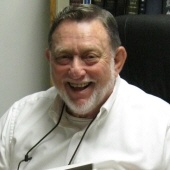 On March 10th, 2020, Garnett Howard Dale of Blue Ridge, Georgia passed away at the age of 83. Garnett was born to Ernest Dale and Nellie West Dale in Dawsonville, Georgia on September 18, 1936. He worked in telecommunications for Southern Bell and AT&T for more than 30 years and had been retired since 1987. Garnett was a graduate of West Fulton High School and Antioch Bible College.

Garnett was devoted to his large family and was an obedient servant of our Lord. He possessed an extraordinary amiable spirit to which friends and strangers alike were drawn. While his physical presence will be missed, the love and faithfulness he bestowed on his family and loved ones will endure for generations. We'll miss you, Pop Pop!

Memorial services will be held at 1:00 on Saturday, March 21, 2020 at Calvary Baptist Church 137 Hightower Road, Ball Ground, Georgia 30107. In lieu of flowers, donations can be made to Gideons www.gideons.org or American Diabetes Association. www.diabetes.org
To order memorial trees or send flowers to the family in memory of Garnett Howard Dale, please visit our flower store.